The index is the proper comparison point for your investments. In their prospectus, mutual funds and exchange-traded funds (ETFs) are required to state the benchmark they are attempting to outperform (in the case of active managers) or match (in the case of passive managers). You will also often see this benchmark for comparison purposes when reviewing performance on the fund's website.

Funds will select an index based on the types of investments or securities the fund is trading in. For example, a fund that will hold primarily U.S. Large Cap stocks may use the S&P 500 Index or Russell 1000 Index as a comparison point. A fund that holds emerging markets stocks may use the MSCI Emerging Markets Index. And a fund composed of U.S. investment-grade bonds may use the Bloomberg U.S. Aggregate Bond Index as its benchmark.

By examining the stated index of a fund, you can understand the assets the manager is likely to invest in and expected returns and risk.

As described above, passive investing seeks to replicate or track a stated market index. Measuring the success of a passive fund is therefore pretty straightforward. A passive fund should very tightly track the performance of its stated benchmark in terms of return and risk. The return of a passive investment in any given time period should be very, very close to the return of the index, less fees charged by the fund.

For example, the SPDR S&P 500 ETF (Ticker: SPY) is an ETF tracking the S&P 500 Index (a proxy for U.S. Large Cap stocks). In the 10 years ending March 31, 2022, SPY returned an annualized 14.50% and the S&P 500 Index returned 14.64%. This annual difference is very close to the fees charged by the fund: 0.09%. And if you drill into shorter time periods, the performance for the fund and the index are also very close, as you should expect from a passive investment. 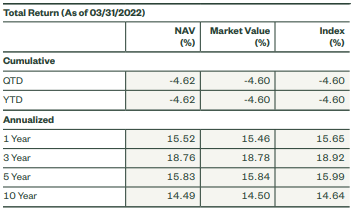 Similarly, the iShares Russell 2000 ETF (Ticker: IWM) is an ETF tracking the Russell 2000 Index (a proxy for U.S. small-cap stocks). As of March 31, 2022, IWM has returned an annualized 8.35% since its inception compared to 8.43% for the Russell 2000 Index. Again, the fund tracks its benchmark very tightly when accounting for the 0.19% annual expense ratio.

In reviewing a passive investment, if you see significant deviations from the return of the fund compared to its benchmark that are unexplained by fees, this is a red flag.

Again, these funds should be compared to their stated benchmarks in terms of returns and risk. But the evaluation is less straightforward because active managers, even those with the same stated benchmark, can have vastly different strategies and expectations.

For example, two managers both using the S&P 500 as their index may use very different strategies, leading to very different expectations for their returns and risk.

Both of these managers hold U.S. Large Cap stocks and use the S&P 500 Index as their benchmark, but will likely perform very differently.

In addition to relative performance of active funds compared to their benchmarks, the risk and consistency of these funds must also be evaluated. Common statistics used to evaluate active funds include:

Which is better: Active or Passive Investing?

It would make sense that "active" management would outperform "passive." I once thought I might be able to make a good living in the market because I saw myself as a fairly intelligent and analytically-minded person. And if it turned out I couldn't pick the best stocks, at least I could identify the best managers who could consistently outperform market indexes. However, active management has consistently underperformed its passive counterparts and I've long since changed my tune.

Multiple recurring studies and publications underscore the difficulties of active management. Morningstar's Active-Passive Barometer is released semi-annually. Some key findings from the most recent publication, released February 2022, include: 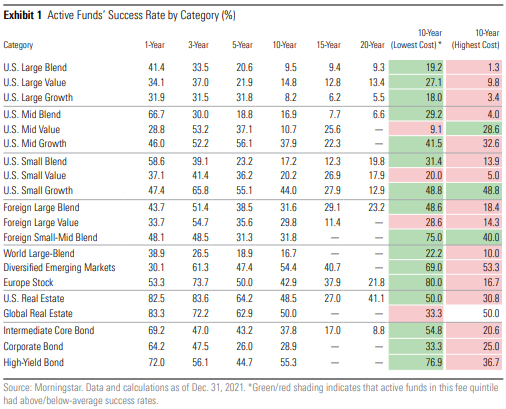 Active managers have generally underperformed their passive peers and odds are against investors expecting to outperform the market.

With so much at stake, investment markets are incredibly competitive. Active managers are competing against one another - with their research staffs, supercomputers, and decades of experience - to identify and take advantage of undervalued securities. The actions of these active managers, buying and selling and setting prices in the marketplace, make the market incredibly efficient and difficult to outperform. And here-in lies the brilliance of passive investing.

Although it's called passive investing, I believe the "passive" moniker massively obscures the research and efforts supporting these passive funds. Passive funds take the collective knowledge of the market (including all those active managers competing against one another) and passive funds use that information to construct their holdings. Passive funds essentially take a free ride on all the research efforts of the active managers attempting to outperform the market. And by replicating the index, passive investments can minimize costs like expense ratios (fees), trading costs, and taxes.

Active managers are competing against one another for those extra couple percentage points (or less) of performance. And after all this effort, they must account for their research staff salaries, overhead, etc. and pass these costs through to the investor through higher fees. More active trading also increases trading costs and taxes. These costs contribute to the exceedingly poor record of active funds compared to their passive counterparts.

Passive mutual funds had grown to nearly 40% of the mutual fund universe as of 2019, with projections of passive surpassing the share of active funds by 2025. The 40% figure is a massive increase from the 20% share of passive funds in 2010. Given this rise in passive investing, critics argue markets are growing less efficient and active managers have a greater likelihood of outperforming. But this depends on which active investors are dropping out of the market.

Less skillful investors dropping out of the market and poor-performing funds closing would lead to a smaller cohort of more skillful investors competing against one another, making the market even more efficient and difficult to outperform. So long as there are active managers trading in the market, price discovery and market efficiency is present.

Even though passive investments may have a large share of the dollars invested in the market, passive investments do not constitute the majority of trading volume. Active managers continue to make the lion's share of trades. A 2018 Vanguard study found passive funds account for only 5% of trading volume. So there is still plenty of price discovery and competition to find the correct price for securities.

A commonly cited reason for using active management is that active managers will be able to better navigate bear markets and downturns. However, this doesn't show up in the data. In a paper from the Chicago Booth school reviewing mutual fund managers during the COVID-19 pandemic, researchers found "between 60 percent and 80 percent of active managers lost money on a risk-adjusted basis relative to their passive benchmarks."

You get what you pay for

Passive funds are relatively cheap, especially when compared to their active peers. According to Morningstar, asset-weighted average fees for active funds in 2020 was 0.62% compared to 0.12% for passive funds. Critics of passive funds will say you get what you pay for and active managers are well-worth their higher fees, but we have already seen that is not the case.

Should you choose passive or active investments?

Despite the overwhelming evidence favoring passive over active investments, the "correct" decision ultimately comes down to what you are most comfortable with. Passive investments have overwhelmingly outperformed active managers, and I expect that to continue. But many investors prefer to see active managers at the helm or individual stocks in their portfolio. In addition to evidence and theory, your personal preferences must be considered in making this decision. As with so much in personal finance, this decision is ultimately personal and must heavily consider which strategy you will be most likely to stick with over the long run.